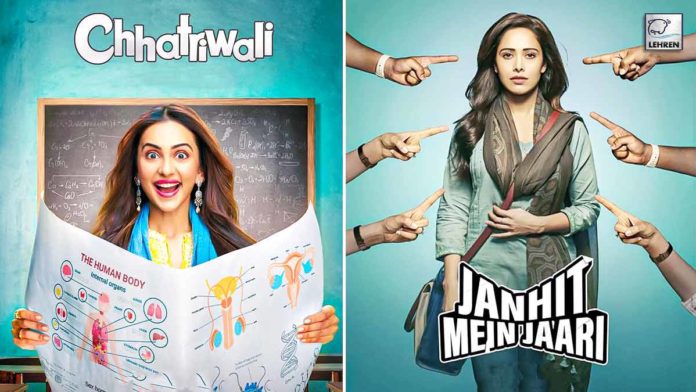 Rakul Preet Singh has potentially proven to be one of the top contenders in the show buzz. She has done movies that are both entertaining and socially awakening. Her recent release Chhatriwali has been taken well by people. But lately, her movie is also being compared to Janhit Mein Jaari which had Nushrrat Baruccha. the movie also had a similar idea of practicing safe sex.

Chhatriwali starring Rakul Preet Singh focuses on a woman who has taken the charge to teach sexual reproduction and male and female reproductive anatomy which is not only educating young children but also helps them understand the subject.

As the trailer was released the movie was thought to be a striking resemblance to Nushrrat Bharuccha’s Janhit Mein Jaari. The film also talked about the same thing but despite talking about reproduction, it talked about safe sex practices (using protection). In a chat with a news portal(Quote from DNA) director Tejas Deoskar and lead actress Rakul Preet Singh address the comparisons and more. When asked about the same Deoskar throws his weight behind Chhatriwali.

“I think it has a complete body to stand differently than any other film because it has its own identity and own personality. But, I think there is no reason to compare this film with any other film. As you know, there could be 10 love stories in a year and they could be still different from one another. Any genre of films, for that matter. In this film, the focus is wholesome. It is not derived from anything else and within the story. We are very true and sincere to our story so I am not even thinking about comparing it with anyone else.”

Rakul says that the comparisons are made because such movies are made less. “Action is normal, the love story is normal, the moment we make films on issues like sexual health, people will stop comparing. Whether it is Doctor G on gynecology, Chhatriwali on sexual education, or a Padman on menstruation, people won’t compare,” she argues.

Deoskar says the film offers a new perspective on the subject. Discussing how he and his team made sure to stay sane while instilling humor, he says, “The essence of the story is to keep writing, to keep repeating, to telling different people over and over again. That’s where you find finer nuances and where you are going wrong. How understanding In general, you need to be sincere with the subject. You can’t pull gags.”