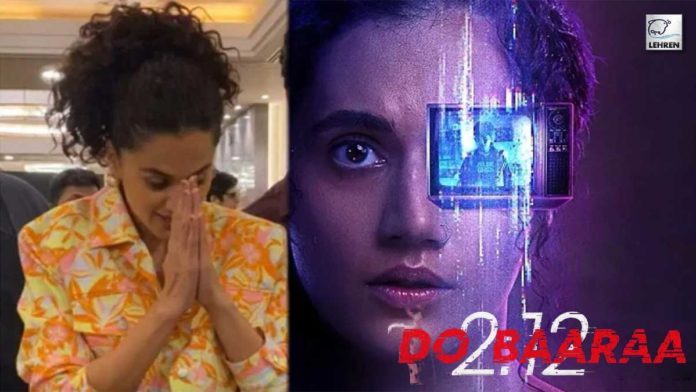 Earlier, Taapsee Pannu urged people to boycott her film Dobaaraa as she feels left out. Looks like people took her words literally and started trending her film on Twitter with the hashtag Cancel Dobaaraa. A week before the release of the film ‘Cancel Dobaaraa’ went on to become the number one Twitter trend.

A Twitter user wrote, “Boycott this movie, she is doing this everytime and we can not accepted #CancelDobaaraa”

Another Twitterati wrote, “This guy @anuragkashyap72 has no life or what? har baat pe point prove karne aa jata hai

Another tweet read: “You all should boycott such a movie, this movie is not worth releasing. #CancelDobaaraa @anuragkashyap72 @taapsee (sic).”

In an interview with India Today, Taapsee joked that she would feel left out if her upcoming movie Dobaaraa isn’t boycotted. In her words, she said: Taapsee said, “Humari picture boycott nahin kiya, toh we’ll feel out of place. Toh please boycott karte rehna. We should be in the league of Laal Singh Chaddha and Raksha Bandhan, and in the league of the films that are being boycotted. We are also a part of Bollywood, we don’t want to feel out of place.”

Dobaaraa is a time travel thriller with a unique concept directed by Anurag Kashyap with Taapsee Pannu in the lead. The duo collaborates for the third time after 2018 hit Manmarziyaa and the 2019 biographical drama Saand Ki Aankh. It is a unique story of time travel and has been screened at London Film Festival & Fantasia Film Festival 2022.  It is produced by Ekta Kapoor and Shobha Kapoor under Cult Movies which is a new wing of Balaji Telefilms. The movie is arriving in theaters on 19th August 2022.