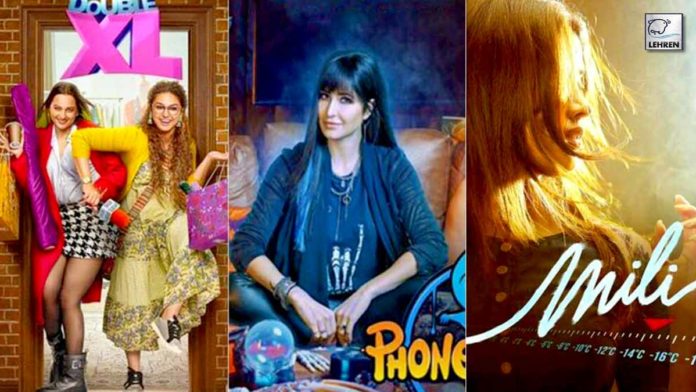 Katrina Kaif starrer Phone Bhoot is expected to give tough competition to Double XL and Mili, here's what trade trackers have to say-

Three family drama films will be released this week on 3rd November. Katrina Kaif starrer Phone Bhoot, Sonakshi Sinha-Huma Qureshi starrer Double XL, and Janhvi Kapoor starrer Mili will be having a clash on Thursday. While as per the latest reports, it is now believed that Katrina Kaif starrer Phone Bhoot might be seen dominating both Mili and Double XL at the box office, here’s why-

As per an Indian Express report, Katrina Kaif, Ishaan Khattar, and Sidhant Chaturvedi starrer Phone Bhoot will be released alongside Double XL and Mili. The horror comedy is now expected to dominate both Mili and Double XL during their box-office clash.

Talking about the films, film distributor Akshaye Rathi told the portal, “It (Phone Bhoot) has an edge over the other releases this week for the simple reason that Katrina Kaif is a bonafide star. There is no doubt she has lakhs and lakhs of fans across the country. She is coming to the big screen after quite a gap, so I am hopeful there will be a sufficient amount of anticipation around the film.”

All About Double XL

Huma Qureshi and Sonakshi Sinha starrer Double XL which was earlier slated for a theatrical release on 14 October alongside Ayushmann Khurrana’s Doctor G and Parineeti Chopra’s Code Name Tiranga will now release on 4 November with Katrina Kaif starrer Phone Bhoot. Double XL is a comedy-drama film that focuses on the subject of body weight. The story talks about subjects like obsession with body weight and female body image issues.

Another film that will give a straight competition to both Phone Bhoot and Double XL is Janhvi Kapoor starrer Mili. The film will feature the father-daughter duo Boney Kapoor and Janhvi Kapoor who will be seen collaborating for the first for a movie. Mili is a remake of the Malayalam film Helen. Apart from Boney-Janhvi Kapoor the film also stars Sunny Kaushal and Manoj Pahwa.