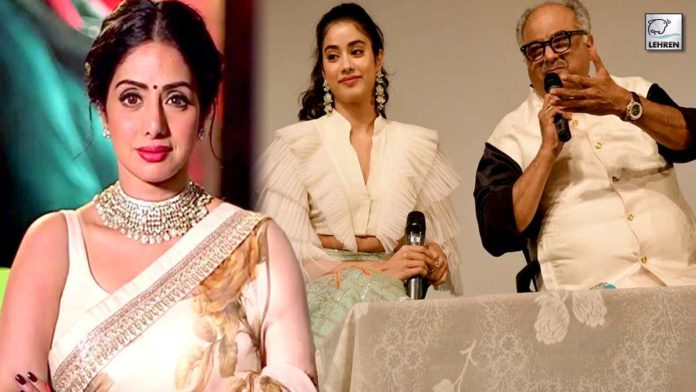 On the professional front, the father-daughter duo Boney Kapoor and Janhvi Kapoor collaborated for the first time. They are all set for the release of the upcoming film Mili. Janhvi is headlining the project whereas her father Boney Kapoor has bankrolled it. During the promotion of the movie, Boney Kapoor opened up on how Janhvi bagged the role.

In Mili, Janhvi Kapoor is playing the role of a nursing graduate who is stuck in a freezer struggling to survive and trying to find a way out. She is frozen but not shaken as she is stranded in the minus-temperature refrigerator. Seemingly Janhvi is out in the game to challenge herself will different roles.

In a conversation with Times of India, Boney Kapoor revealed how he and Janhvi landed in the project. He said, “I was approached by a producer to make this film (Mili) and he wanted Janhvi for the part. Yeh film ek-do mahine se unke (Janhvi) manager ke paas thi (the film was with her manager for a month or two). I had already been recommended to watch the original. When I saw it, I couldn’t control my tears and I jumped into this subject wholeheartedly. I chose director Mathukutty Xavier of the original film, who won the National Award for it. Even before the director was signed, I approached Manoj Pahwa, who saw the original and said yes.”

Talking further about the film he also compared the Goodluck Jerry actor to her late mother Sridevi. “My daughter is an enthusiastic and hardworking actor. She insisted on shooting in an actual freezer where the temperature was as low as minus 8 to minus 12 degrees Celsius. In the second half of the film, she hardly has dialogues, and it is only through her expressions that everything is conveyed. I was sure she could pull off this part well, especially after seeing the kind of varied characters she has played in her previous films. The audience should wait and watch her in a full-fledged comedy film because that is her forte. She has fantastic comic timing and a sense of humour like her mother (Sridevi),” said the film producer.