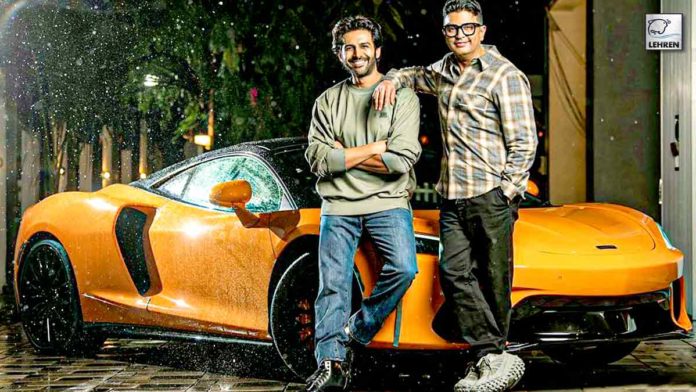 Bhool Bhulaiyaa 2 star Kartik Aaryan has been riding over the success he received at the box office with his film Bhool Bhulaiyaa 2. While recently the Bollywood actor has received a McLaren GT from Bhushan Kumar as a gift of his hard work, that’s not it as the actor has now become the only person in the country with the McLaren GT. Check out the whopping amount of the car.

Bollywood actor Kartik Aaryan has now made an addition to his car collection with the new McLaren GT, the actor previously owned a BMW 5 Series, a MINI Cooper S Convertible, Porsche 718 Boxster, and Lamborghini Urus Capsule Edition. While this is not the whole story, since the new car has been gifted by producer Bhushan Kumar. For the unversed, the supercar is worth ₹3.73 crores, ex-showroom. Which is currently the most affordable McLaren on sale in India. Kartik’s McLaren GT features a swanky orange shade with wheels in gloss black the actor took the delivery of his new car from Infinity Cars in Mumbai.

Actor Kartik Aaryan and Producer Bhushan Kumar have worked on quite a few projects together by now, the two earlier collaborated for Sonu Ke Titu Ki Sweety which was also one of the hits in Kartik Aaryan’s blockbuster list. The two also share a good bond together, in a recent interview producer, Bhushan Kumar praised Kartik for being a helping hand in tough times and the one who stood there for him, talking about the actor he said, “He’s very grounded that way. Everyone should think about it that if we are making a big film then it’s necessary to spend on it. He understands that. We have another film together- Shehzada. I don’t want to say, but in Shehzada a situation came where he stood by the producers. So that reveals that he is not running after money, he is running after good content.”

On the work front, Kartik Aaryan will be next seen in the film Freddy with Alaya F, Shehzada, and Captain India.