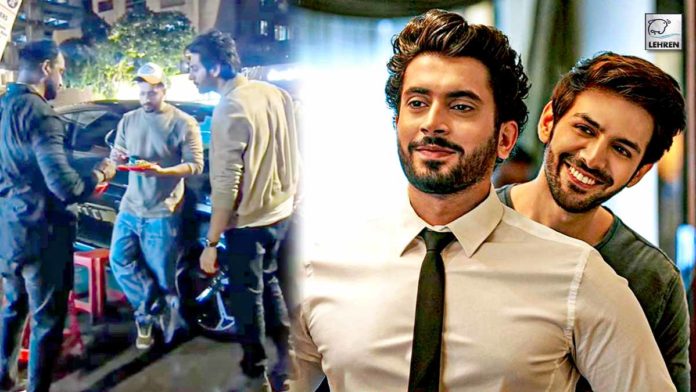 Amidst the record-breaking success of the film Bhool Bhulaiyaa 2, Bollywood actor Kartik Aaryan was recently spotted enjoying Mumbai munching on the street food with his friend Sunny Singh. The video has been making rounds over the internet as fans shared their reaction to the video.

Bollywood actor Kartik Aaryan is known for his down-to-earth attitude as he enjoys his fandom with his fans. The actor is often spotted taking pictures with his fans and enjoying his favorite street food during other times. Recently the actor was spotted on the streets of Mumbai with his friend and Sonu Ke Titu Ki Sweety co-star Sunny Singh.

In the viral video, the actor could be seen relishing tasty street food with his friend Sunny Singh. Both the actors were seen chilling at the joint, and their fans were pleasantly surprised. Kartik even graced his fans and clicked a few selfies with them. The video has garnered quite some views by now.

While reacting to the video netizens shared their reactions in the comments section and wrote, “Down to earth person”, a user wrote, “Tera yaar hun main moments”, “Middle class family mein se hai na ehmiyat janta hai”, “Thats why he is a blockbuster hero now such a down to earth human being”, another user commented, “Kuch b kahao Banda grounded and success sir p nae chandne data.”

Earlier the actor was spotted during the Style Icon awards where a video of him and Karan Johar went viral. As the actor avoided dancing over JugJugg Jeeyo’s song while many indicated his tiff with the filmmaker Karan Johar.

On the other hand, Kartik’s film Bhool Bhulaiyaa 2 has emerged as one of the biggest blockbusters of the year so far. Even a month after its release, Bhool Bhulaiyaa 2 has been ruling the hearts of the audience and the box office. On Monday, trade analyst Taran Adarsh reported that Kartik Aaryan’s film earned Rs 5.68 crore on its fifth weekend, taking its total collection to Rs 181.82 crore. While the film has now been released on Netflix as well which has been taking the figures higher than before.

On the work front, Kartik Aaryan will be next seen in the film Freddy and Captain India while Sunny Singh is currently gearing up for his film Adipurush where he will be seen alongside Prabhas, Kriti Sanon, and Saif Ali Khan.