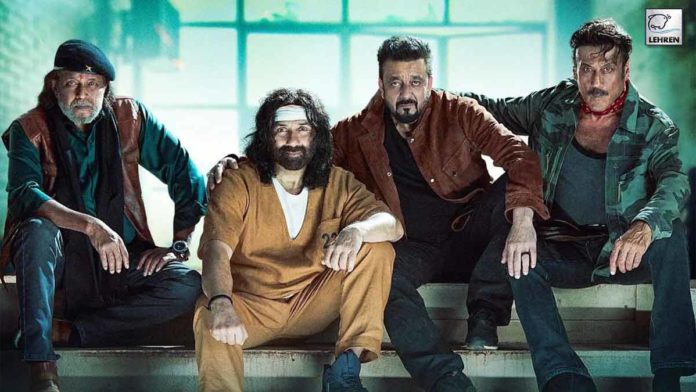 Baap First Poter: Bollywood’s veteran superstars Mithun Chakraborty, Suny Deol, Sanjay Dutt and Jackie Shroff will be collaborating for a film soon. Actor Jackie Shroff recently shared the first look with the actors on his social media. The actor shared the news of this much-anticipated collaboration with all other actors, while many fans and celebrities shared their reactions on the same, take a look-

On Wednesday Bollywood actor Jackie Shroff shared the much intriguing looks of actors Mithun Chakraborty, Sunny Deol, Sanjay Dutt in their upcoming film which is expected to be named as “Baap”. Sharing a glimpse Jackie wrote, “#BaapOfAllFilms Shoot dhamaal, dosti bemisaal”. All the actors were seen in a ganster type look in the picture take a look-

Apart from the b-town celebs many fans also shared their excitement to this upcoming collaboration a user commented, “This is going to be absolutely amazing. All my favorites in one frame”, “too cool too good Sir – all looking great – god bless”, another user commented, “The Indian expendables… dammmnnn the 90s me is getting legit excited”.

For the unversed, Mithun has earlier collaborated with Jackie in the past as well. The two collaborated in films like Yamraaj, Shapath, Ganga Ki Kasam, and Phool Aur Aag. Apart from Jackie Mithun has also worked with Sanjay in Luck, Jeete Hain Shaan Se and many others. The collaboration of all these 4 actors seems to be a visual treat for the fans.

Well, this upcoming collaboration of the 90s is definitely making many of us nostalgic. Providing the details about the film, trade analyst Taran Adarsh stated that the film will be an action-entertainer. And Vivek Chauhan who is known for his famous works like Highway, Tanu Weds Manu will be directing this upcoming action-entertainer. Further details about the film are awaited.