When Athiya Shetty Was Rumored To Be Dating Canadian Rapper Drake 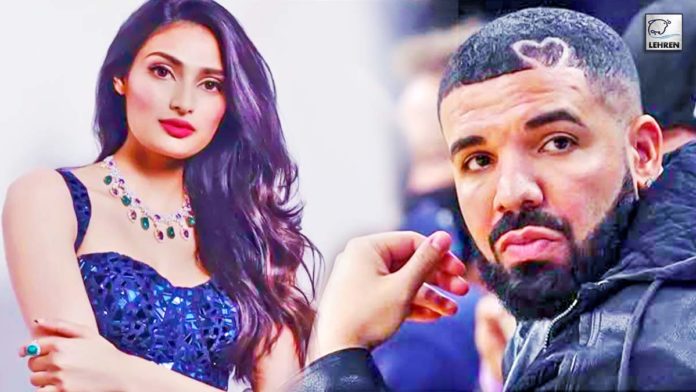 When drake once commented on Athiya’s post, people thought they were dating, the latter had to clear the misunderstanding.

The people on the internet or netizens as we call them are quick-eyed and often pretentious. It takes split seconds for people to notice things that would’ve been better off unnoticed. One such incident happened a few years back when Athiya had posted her sweet picture on Instagram on her birthday. It was then when American rapper Drake commented on the picture that took everyone’s attention.

“This one was extra special and happy indeed. Thank you for all the love, wishes, and blessings. I truly feel so tremendously grateful and special. To my main people, I love you. You know who you are. PS: 26, be kind,” her picture read where she could be seen cutting a cake.

‘My Shetty’ Drake called her and even called her a ‘goddess’ in the comment. “Happy birthday to my Shetty a true Goddess. Guess who is watching Mubakaran 3 times on the tour bus in your honor,” he wrote and added a few hearts and laughing emojis.

Fans were left in shock to learn that the American rapper watched a Bollywood film. “Omg! He is watching “Mubarakan”, I mean what LOL,” read the comment. “Hindi aati hai?,” asked another fan. “NO SH*T SINCE WHEN DID DRAKE KNOW THE SHETTY’S,” commented another fan, letting their surprise show with the all-caps font.

However this isn’t the only instance, let us remind you when Athiya had uploaded a picture with father Suniel Shetty, Drake commented ‘Legend’ under the post.

These instances were enough for netizens to jump to conclusions and declare that something was definitely cooking between the two.

Athiya had to clear the air and released an official statement mentioning that Drake is nothing but just a good friend that she knows. It was at one of the nightclubs in London that the two had met and instantly had become good friends. It was since then that the two started following each other on Instagram and remained in touch since then. Athiya had also shared how she is also a big fan of his music and they both are just like ‘pen pals’ as the two actually never met after that incident ever.

Meanwhile, Athiya has recently made her infamous relationship with cricketer KL Rahul official. The two often share each other’s pictures on Instagram and even were spotted together several times, from Athiya attending his matches to support him to him attending Athiya’s brother’s movie premiere. It’s not a secret anymore, certainly, the couple is enjoying all the limelight.