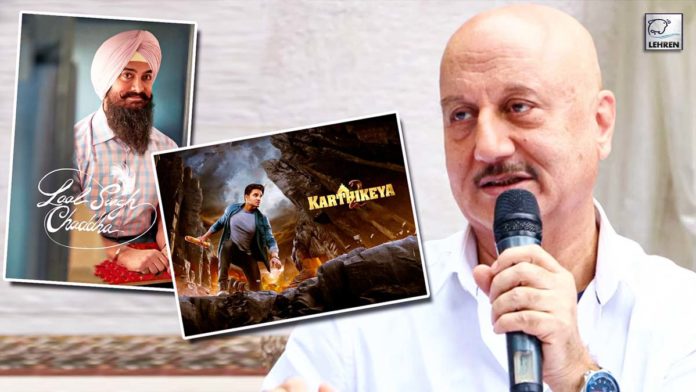 The Kashmir Files actor Anupam Kher has been grabbing quite some attention lately, the veteran actor recently grabbed the headlines after he called out Aamir Khan for Laal Singh Chaddha’s box office failure. While recently the actor opened up on the difference between South films and Bollywood films, he said, that South films are telling stories while Bollywood is selling stars.

The Hindi industry has witnessed many Bollywood flops this year, while at the same time South industry has been delivering some Blockbuster films like Pushpa, RRR, and KGF 2. Opening up about the same the Kashmir Files actor Anupam Kher told E times, “You make things for consumers. (Problem starts) the day you start looking down on consumers, that, ‘we’re doing you a favor by making a great film. Now you are watching a great film.’ Greatness is achieved by a collective effort and I have learned by doing films in Telugu…I just did another film in Telugu, I did a film in the Tamil language, and I’m going to do a Malayalam film.”

He added, “I think over there, I’m not differentiating between the two but I think (their) cinema is relevant because they are not aping Hollywood. They are telling stories, over here we are selling stars.”

Earlier the Kashmir Files actor opened up about the disappointing performance and the viral Boycott trends faced by Aamir’s film, Laal Singh Chaddha. In an interview with India Today.in, Anupam Kher said, “If you have said something in the past, it will surely haunt you.” “If someone one feels that they should start a trend, they are free to do so. There are new trends on Twitter every day”.