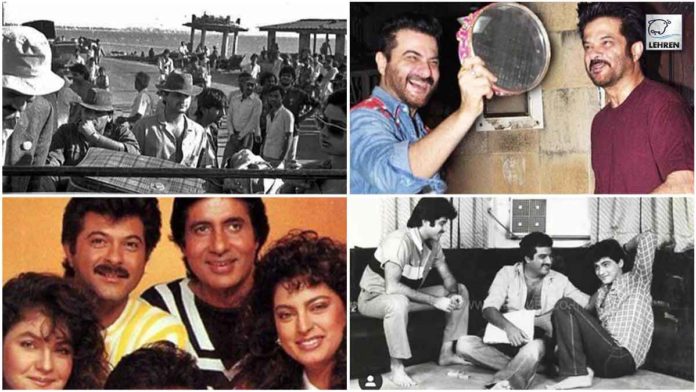 Sanjay Kapoor is celebrating his birthday today. He has been receiving special wishes from near and dear ones including his film peers. One of the much-loved wishes he received is from his elder brother Anil Kapoor. On this occasion, the latter penned a heartfelt note to wish his brother.

Anil Kapoor gets nostalgic as he uploads throwback pictures to his Instagram account. He shared a set of four photos including brother Boney Kapoor and actors like Amitabh Bachchan, Juhi Chawla, and Pooja Bhatt. The Malang actor dropped throwback images and unseen photos to wish his brother Sanjay Kapoor 60th birthday.

The first picture is a black and white image where three brothers Anil Kapoor Boney Kapoor and Sanjay Kapoor are posing candidly. The second from the multi-picture post is of Karva Chaut as Sanjay is seen holding a sieve in his hand. The third one is a BTS from one of the film’s sets. The last throwback frame captures Anil and Sanjay with Pooja Bhatt, Amitabh Bachchan, and Juhi Chawla.

Wishing his younger brother, Anil Kapoor wrote, “Sanjay, I admire your spirit, humour, never die attitude, the way you look after and love our mother and your family…I truly believe that 60 is just the beginning of even more wonderful decades for you, not just as a family man, but also as an artist. Happy 60th Birthday Sanjay! Love you ❤️❤️❤️❤️ @sanjaykapoor2500”

Sanjay Kapoor replied to the post by writing a comment, Love you too ❤️❤️. Sanjay’s wife Maheep Kapoor too made a comment on the post dropping five heart emojis. Fans got overwhelmed seeing the flashback memories on their feed and dropped birthday wishes for the actor.

Sonam Kapoor digs some adorable old pictures from her childhood to wish uncle Sanjay Kapoor. In the pictures, Sanjay is seen playing with baby Sonam Kapoor and Rhea Kapoor. She also shared a rare picture of Kapoor brother. She wrote, “Happy happy birthday chachu! We love you! To the funnest coolest uncle, we hope we always party with you! Jiyo hazaro saal! Happy 60!”

Sanjay celebrated his birthday with family and friends in Dubai. Kapoor Brothers – Anil Kapoor, Boney Kapoor, and Sanjay Kapoor hit the dance floor. The midnight party was attended by Farah Khan, Chunky Panday, Bhavana Panday, and Seema Sajdeh among others.