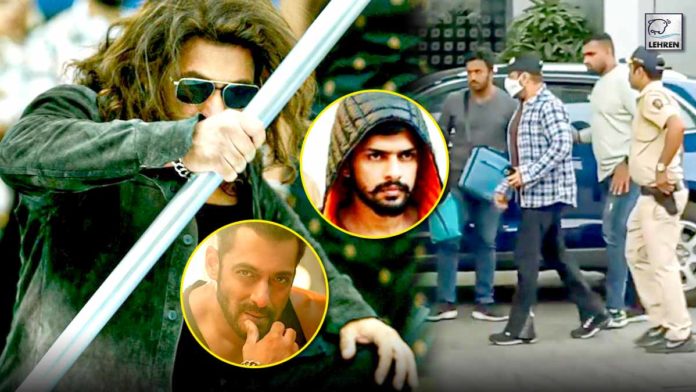 Amidst the buzz, the Tiger actor was spotted leaving at a private airport as left to shoot his upcoming film 'Kabhi Eid Kabhi Diwali'.

Bollywood actor Salman Khan has recently received death threats following the death of the Punjabi singer-rapper Sidhu Moose Wala. While the gangster behind Sidhu’s death is being doubted behind the threat. While recently amidst the buzz the Tiger actor was spotted leaving at a private airport as left to shoot his upcoming film ‘Kabhi Eid Kabhi Diwali’.

Salman Khan was recently spotted in IIFA hosting the awards. On Sunday, Salman Khan’s father Salim Khan received an anonymous letter threatening them both. This comes after singer Sidhu Moose Wala was killed on May 29. According to reports, Salman will be going to Hyderabad to shoot for his next film Kabhi Eid Kabhi Diwali.

In a recent video, the actor could be seen leaving the city as he got spotted at a private airport with high security. According to the reports, the will be flying with his whole team to shoot for the film, the filming has been scheduled for approx 25 days. After the shoot, the actor is reported to join the team of Tiger 3 and shoot in Mumbai.

While recently the Dabangg actor was spotted outside his residence as his security has been enhanced soon after receiving the threats. After this threat letter, the actor filed an FIR and now CBI officials have reached his residence. According to the reports, “Maharashtra Home Department strengthens actor Salman Khan’s security after a threat letter was sent to him and his father Salim Khan yesterday, June 5,”. Recently, A CBI officer was photographed outside Salman Khan’s house a day after the actor and his father and renowned screenwriter-producer Salim Khan received a threat letter.

While it is to be noted that the gangster has previously threatened to eliminate Salman Khan over his involvement in the blackbuck case, due to which the police had to stop the actor’s ‘Race 3’ shoot for a while. The same year, one of Bishnoi’s aides was arrested over a death threat issued to the actor in the blackbuck killing case.