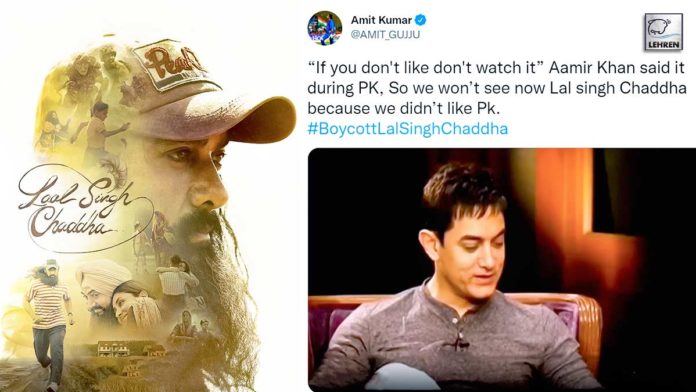 Amidst the viral boycott trends, an old video of actor Aamir Khan is now going viral in which the actor is seen saying, ‘don't like it don't watch it’. Check out netizens' reactions to the video.

LaalSinghChaddha: Days before the release a boycott trend has been trending against the movie Laal Singh Chaddha on Twitter. While recently another video of Aamir Khan is now making rounds over the internet in which he is seen saying, ‘don’t like it don’t watch it’. Reacting to the video netizens have now also shared their reactions, take a look-

Amidst Boycott Trend, Another Video Of Aamir Khan Goes Viral

Meanwhile, now another video has surfaced on the internet in which the Laal Singh Chaddha actor is seen telling his audience to not watch his films if they don’t like it. In the interview, Aamir said, “Every person has the right to put forward their views and opinions, so if they don’t like the film they shouldn’t watch it.” The actor was seen with filmmaker Rajkumar Hirani during his interview. Watch the video here-

To this netizens shared their reactions, a user wrote, “I’m surprised some people still think this man is a hero and a role model. Seriously? He insulted Hindu gods in his films and deliberately hurt our sentiments. If you still watch his films the joke is on you.” Another user wrote, “If these films does good numbers at box office then I will definitely lose faith in the people of my country! Specially after so much said and done by #AamirKhan and #KareenaKapoorKhan(she I have always felt is overrated)”.

Earlier actor Aamir Khan responded to the boycott trends and said, “Yes, I feel sad. Also, I feel sad that some of the people who are saying this, in their hearts, they believe that I am someone who doesn’t like India. In their hearts, they believe, but it is untrue. It is rather unfortunate that some people feel that way. That’s not the case. Please don’t boycott my film. Please watch my film.”