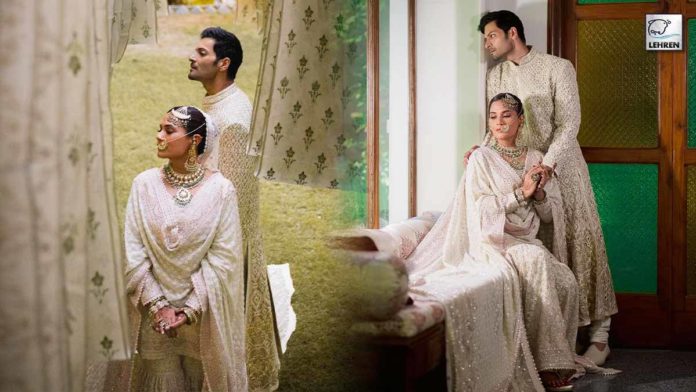 Richa Chadha and Ali Fazal share pictures from their reception in Lucknow, the wedding of the duo will be held in Mumbai.

Fukery couple Richa Chadha and Ali Fazal have been giving out major couple goals in their recent pictures from their wedding festivities in Lucknow. The duo reportedly flew off to Lucknow to celebrate their reception. In the recently shared pictures, the couple were seen twinning together in Abu Jani and Sandeep Khosla’s outfits, take a look-

On Tuesday, Bollywood new couple Richa Chadha and Ali Fazal shared a series of new pictures from their wedding festivities. As per the reports, the two went out to Lucknow to celebrate their reception. For the event, the two wore Abu Jani and Sandeep Khosla’s outfits. Sharing the pictures Richa wrote, “I got you. #RiAli,”, while Ali captioned the post and wrote, “Ek Daur hum bhi hain. Ek silsila tum bhi ho. #RiAli.”

Sharing their reactions many Bollywood celebrities commented on the post, Swara Bhasker wrote, “Stunning you guys!!!!”, Zareen Khan commented, “You make such a beautiful bride, Richa !”, Neha Bhasin wrote, “A sight to behold”.

As per the reports, it is now believed that the couple would be hosting a reception this evening in Mumbai, where many Bollywood actors like Vicky Kaushal, Vidya Balan, Karan Johar,  Ayushman Khurana, Aparshakti Khurana, Taapsee Pannu, Sanjay Dutt among various other celebrities will be spotted.

According to the reports, Alia Fazal and Richa Chadha’s pre-wedding festivities began at a venue near Delhi at the end of September and continued for three days. The duo has chosen a royal heritage fort property near the Delhi-Jaipur highway for their pre-wedding events. The three days functions included Haldi, Mehendi, and Cocktail party. Ali and Richa will then return to Mumbai for the wedding and reception. They will host around 400 guests in their reception. Many Bollywood celebs are expected to be a part of it.