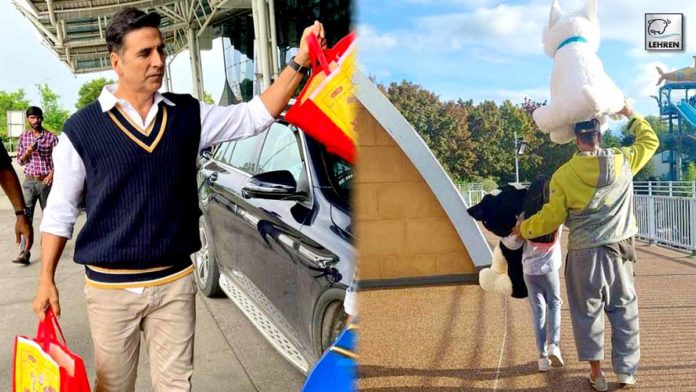 Akshay Kumar shared a video and wrote, "hands down the closest I’ve felt to being a hero."

Silver screen actors are often perceived as heroes. It’s because of their larger-than-life projection, dreamy love stories, mind-boggling actions and heart-warming dialogues. However, this cinematic ride doesn’t make an actor ‘a hero’. Khiladi Akshay Kumar, who has many times played action hero on-screen and has emerged to be a real-life hero with his hard work, persistence, dedication and social work, reveals the one moment that truly made him feel like a hero.

It didn’t happen on-screen, it didn’t happen during any fan interaction. Akshay Kumar felt like a hero when he took his daughter Nitara to an amusement park and won two big stuffed toys for her.

Akshay shared a short video and a picture on his Instagram profile and wrote, “Took my daughter to an amusement park yesterday. Looking at her happy smile on winning not one but two stuffed toys for her was hands down the closest I’ve felt to being a hero. #BestDayEver”

Akshay Kumar has a very soft spot for his daughter. Though he rarely posts Nitara’s pictures on social media, but whenever he does, it showcases the abundance of love he has for her in his heart.

On the work front, Akshay was last seen in thriller film Cuttputlli, alongside Rakul Preet Singh and Chandrachur Singh. The film was released on Disney+Hotstar. Akshay has many exciting films in his pipeline. Some of them are Ram Setu, Selfiee, Gorkha, Bade Miyaan Chote Miyaan, Hera Pheri 3 etc.