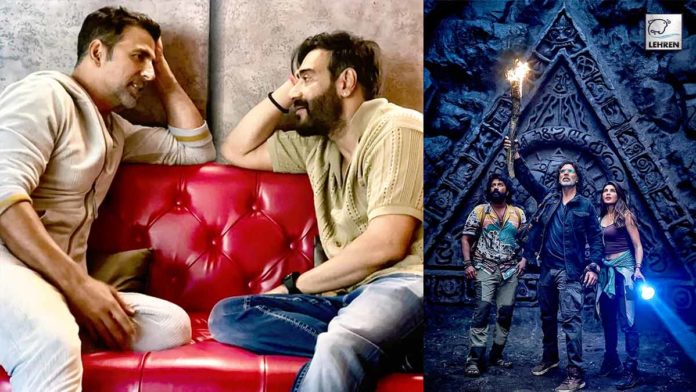 After giving Samrat Prithviraj, Bollywood actor Akshay Kumar is now gearing up for his upcoming film ‘Ram Setu’. The film was earlier speculated to be released over OTT while now the makers of the film have confirmed the theatrical release of the film. The film will be foreseeing a clash with Ajay Devgn’s movie ‘Thank God’.

After the lackluster performance of the film ‘Samrat Prithviraj’ it was speculated that Akshay’s upcoming film ‘Ram Setu’ will be making an OTT release. While rubbishing the rumors the makers of Ram Setu have now announced the film to have a theatrical release. Ram Setu’s producer Vikram Malhotra has dismissed all these reports.

On the other hand, Ajay Devgn, Sidharth Malhotra, and Rakul Preet Singh’s starrer Thank God, which was scheduled to be released in July, will now be released on the big screen on Diwali and will now see a direct clash with Akshay’s ‘Ram Setu’.

Directed by Indra Kumar and produced by Bhushan Kumar, the film is a slice-of-life drama that has a beautiful message layer with comedy. Ajay and Rakul will be reuniting on screen for the third time after De De Pyaar De and Runway 34. The movie also marks the first collaboration between Indra Kumar and Devgn after they worked on the 2019 action-comedy Total Dhamaal.

Apart from Ram Setu the Akshay is also gearing up for his upcoming film Raksha Bandhan, Bollywood actor Akshay Kumar’s film Raksha Bandhan will hit the theatres on 11th August, the film will star Bhumi Pednekar along with Akshay Kumar. While announcing the release date of the film on Instagram, Akshay wrote, “Bringing you all a story of the purest form of bond that will remind you of yours! #RakshaBandhan releasing in cinemas on 11th August 2022.”

The film is helmed by Dr Chandraprakash Dwivedi and produced by Vikram Malhotra. Following its theatrical release, the film will be available across 240 countries on Amazon Prime.” With the scheduled release on October 24, 2022.

On the work front, Akshay Kumar was last seen in Prithviraj which unfortunately didn’t work at the box office much as it was expected, while the actor also has Mission Cinderella, Ram Setu, Selfiee, OMG 2 in the pipeline.