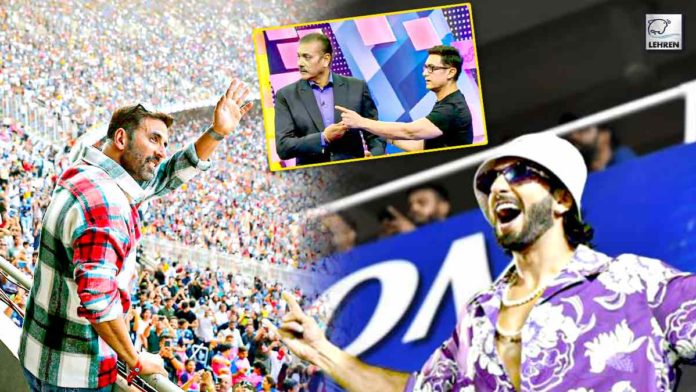 On the final evening of IPL 2022, many Bollywood celebrities graced the event as both the teams, Gujarat Titans and Rajasthan Royals fought for winning the title this year. From Akshay Kumar to Aamir Khan various celebrities were spotted at the event, check out the list here-

Bollywood superstar Akshay Kumar was also present at the stadium and was seen waving at fans during the IPL final 2022. Along with Akshay, Lal Singh Chaddha actor Aamir Khan was also spotted as a commentator as he promoted his upcoming flick, however, the netizens didn’t like his commentary in the final as the Mr. Perfectionists got trolled on social media.

Meanwhile, other actors including Actor Ranveer Singh was also seen at the event as he danced to several songs at the closing ceremony. Fan accounts shared his videos online in which the actor could be seen dancing to Naatu Naatu from RRR, Vaathi Coming from Master, Tattad Tattad from Goliyon Ki Rasleela Ram-Leela, and more representing the IPL teams.

Ranveer Singh shared a short video of his dance preparation on Instagram. Sharing the video, Ranveer wrote, “Capacity Crowd? …. Just bring it! Tune in to watch me live to performing at the Closing ceremony of Tata IPL Final 2022 on Star Sports & Disney Hotstar today at 6.25 pm.#TATAIPL #TATAIPLFINAL @iplt20”.

While other names from the event included Neeti, Urvashi Rautela, Sourav Ganguly, Rajeev Shukla, Jay Shah, and Brijesh Patel. While the trailer of Aamir Khan’s film ‘Lal Singh Chaddha’ has been released during the final of IPL 2022. Aamir Khan Productions had already mentioned this while sharing a post on his Instagram account.