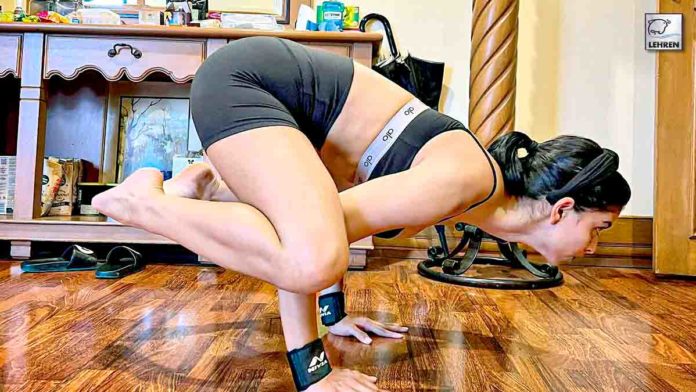 A yoga picture of SRK's daughter Suhana Khan is going viral on social media. Her instructor penned a note.

Daughter Of SRK, Suhana Khan is making headlines, since the release of ‘The Archies’ trailer. Bollywood’s King Khan is right now on cloud nine as his daughter is starting her acting career in the entertainment industry. Suhana is all set to step into the film industry with Zoya Akhtar’s, ‘The Archies’. As the popular star kid is gearing up for the debut, she is making sure that no stone is left unturned to look the best. Whether it be her acting skills or fitness, the popular face is doing her best every day to impress the fans.

The popular star kid was seen performing intense yoga. The photo is going viral on social media. Her yoga instructor recently dropped an unseen photo of Suhana accompanied by a small caption. The instructor wrote, “ Here is the darling @suhanakhan2 doing the #kakasanapose just in a few classes together! The champ she is showing on the Mat! The sweet, chirpy, and Uber cool! Ever so helpful and always ready to try something new!
She’s one hellova explorer. You’re so kind and adorable both on and off-screen Suhana You have a long way to go!! You’re going to shine and succeed in leaps and bounds Love ya”.

A few days back, Suhana’s father and superstar of Bollywood, Shah Rukh Khan went on to his social media handle and penned a lovely note to his daughter. He congratulated her on her debut film. Sharing the poster he wrote, “And remember Suhana, you are never going to be perfect… but being yourself is the closest to that. Be kind and giving as an actor… the brickbats and applause are not yours to keep…the part of you that gets left behind on screen will always belong to you…you have come a long way baby… but the road to peoples heart is unending…stride forth and make as many smiles as you can. Now let there be Light…Camera and Action!”