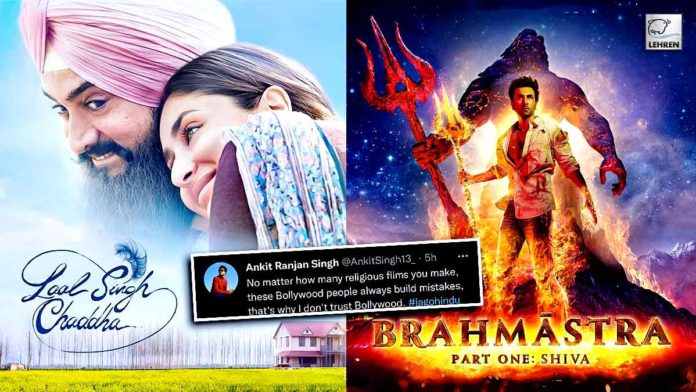 Bollywood actors Ranbir Kapoor and Alia Bhatt’s much-awaited film Brahmastra trailer is out. The trailer was dropped on 15 June. The trailer received an amazing response from the audience while many celebrities were also seen praising the team. While recently a trend has been gaining momentum on Twitter, where netizens could be seen promoting the boycott Brahmastra trend on Twitter.

The Brahmastra trailer features the megastars in a never seen visually dynamic avatars. What has grabbed the attention of many has been the amazing visual effects of the film. Soon after the release, the trailer of the film has taken over the internet by storm with the dynamic VFX which is all praise.

But with good comes the bad, as now some Twitter users have urged the masses to boycott the film due to varied reasons. While this is not the first time that netizens have started the boycott trend, as earlier during the trailer release of Aamir Khan’s film Laal Singh Chaddha and Prithviraj the netizens were seen promoting the same trend over the internet.

What Made Netizens Upset With Brahmastra Trailer?

While the reason behind boycotting remains quite similar, recently released Samrat Prithviraj and Aamir Khan’s upcoming film Laal Singh Chaddha were being boycotted by the netizens where some stated that the reason behind the trend was their religious sentiments while others stated it as ‘Nepotism’. Meanwhile, for Brahmastra the same reasons are flowing up as many users could be seen posting pictures of Ranbir wearing shoes inside the mandir while others are seen posting comments over nepotism.

Sharing the trend a Twitter user wrote, “Entering Temple with shoes, this is what we can expect from Urduwood. Bollywood never misses a chance to hurt our sentiments towards Sanatana Dharma.”, another user wrote, “Entering in the temple with shoes. Bollywood only knows to hurt our religious sentiments and mock our culture What more we can expect from them”.