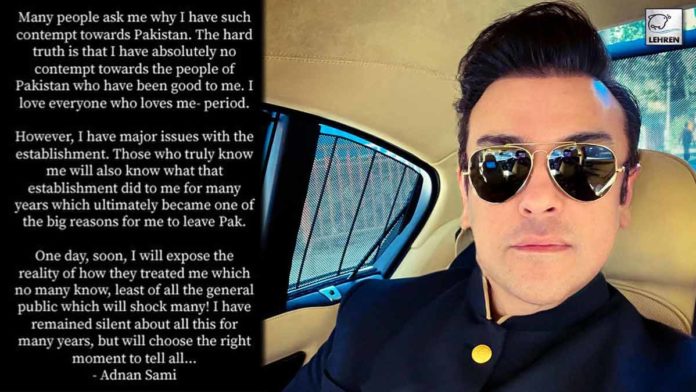 Adnan Sami recently shared a post where he addressed how the Pakistani administration treated him, he further stated to "expose the truth".

Adnan Sami is one of the most renowned singers in the Bollywood industry. The singer renounced his Pakistani citizenship to become a resident of India. While in a recently shared post Adnan was seen addressing how the Pakistani administration treated him, he further stated to “expose the truth”.

On Monday Adnan Sami shared a long note on his Instagram as he stated to expose the Pakistani administration, “Many people ask me why I have such contempt towards Pakistan. The hard truth is that I have absolutely no contempt towards the people of Pakistan who have been good to me. I love everyone who loves me- period. However, I have major issues with the establishment. Those who truly know me will also know what that establishment did to me for many years which ultimately became one of the big reasons for me to leave Pakistan.”

Adnan further said that he’ll expose the truth, “One day, soon, I will expose the reality of how they treated me which not many know, least of all the general public which will shock many! I have remained silent about all this for many years, but will choose the right moment to tell all,”

Reacting to his accusations many netizens shared their reactions, a user commented, “You should reveal it right away. Don’t wait for the moment. Now is the moment. Reveal it.” another user commented, “You are an Indian now and we are proud to have you… A musician like u is not less than an honour to our mother land and our music industry love u sami sir”.

Adnan Sami revoked his Pakistani citizenship to become a citizen of India in 2016. The singer was brutally criticized for the same by many netizens from Pakistan. In 2021, the Bollywood singer opened up about getting Indian citizenship and said how he is blessed to be able to live in India.

In an interview, the singer said, “Today, I’m a firm believer that there’s no such thing as coincidence. What happened to me because of that was my destiny was written in India. My future and my dharambhoomi were all connected to India. The love that I’ve for India was so rooted in my childhood that it was like the angels were telling me that I need to shift my focus over there. I can’t write this part of my life as a mere coincidence. It’s far deep than that.”