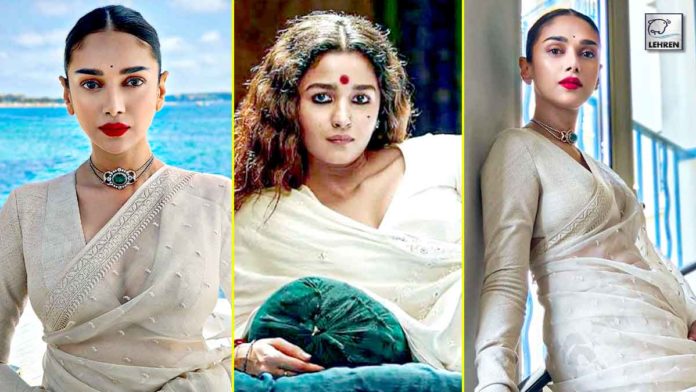 Cannes 2022: Aditi Rao Hydari has made her debut at Cannes this year. For her first look, the actress chose to go for a simple plain Sabyasachi saree. However, her look made quite some intriguing reactions from fans.-

Bollywood actress Aditi Rao Hydari made her Cannes debut as she wore a Sabyasachi saree as her first outfit for her special debut. Sharing her pictures on her Instagram, the actress wrote, “My ammaamma would be proud simplicity and tradition in my favourite @sabyasachiofficial.”

The actress also shared a short video in the saree on her Instagram as she wrote, “A little piece of my heart from Cannes. Make your own version to this audio and tag me ♥️ @sabyasachiofficial”.

For the occasion, the actress wore a white Sabyasachi saree. The pictures featured her wearing a hand-dyed and embroidered ivory organza sari, which she paired with an emerald and diamond choker from Sabyasachi Jewellery’s Bengal Royale Collection. This marks the second time a Sabyasachi outfit has been spotted at this year’s festival.

Before Aditi actress Deepika Padukone also made her first appearance at Cannes 2022 in a black sequenced Sabyasachi saree as well. Though Aditi’s look has been quite resembling with Alia Bhatt’s look from the film Gangubai Kathiawadi as in the film Alia also wore a similar white saree with a quite similar makeup and hair look.

Reacting to her pictures many Hollywood celebrities and her fans showered her love in the comments section Patralekhaa wrote, “Ati Sundar,” while Huma Qureshi commented with a red heart emoji. Manisha Koirala wrote, “Stunning,”. While one of her fans wrote, “Do not stare at this post for long….. you might fall in love with her”.

On the work front, Aditi was last seen in the Tamil film, Hey Sinamika, alongside Dulquer Salmaan and Kajal Aggarwal. She also has Gandhi Talks and Jubilee in the pipeline.

ALSO READ: Ranveer Singh Leaves For Cannes 2022, Netizens Troll Him For His Look