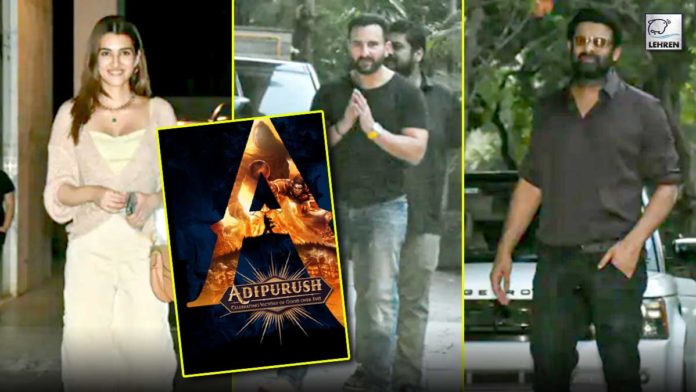 Bollywood actors Saif Ali Khan, and Kriti Sanon were recently spotted with Prabhas at Om Raut’s house party. The Adipurush team was spotted at the party as the trio posed for the paparazzi, while the videos of the three have been going viral.

During his house party the Adipurush trio Prabhas, Kriti, and Saif were spotted at Om Raut’s residence as they attended his party. Prabhas opted for a casual look as he wore a dark brown shirt with black jeans with shoes. While the lead actress of the film, Kriti Sanon wore a casual white outfit with a pullover and completed her look with white shoes and a brown bag. While as for Saif, the actor was also seen pulling off a simple yet stylish look in denim and a black tee. In the video, Saif greeted the camera persons with folded hands and later shared a hug with Prabhas and director Om Raut.

Apart from the three Sunny Singh who will be seen playing Laxman in the film was also seen in a buzz cut kinda hairdo. The actor was spotted with Kriti Sanon as he wore a blue hoodie and black bottoms with white sneakers. The party was also joined by Producer-distributor Anil Thadani of AA Films.

Sharing the reactions netizens wrote, “Just one offline look is enough”, another user wrote, “Annnaaaaaaaaa The King is Getting Back To His Old Form”, “Bhai inki movie ka tho kon wait nii krta”, “Simple but looking so good “. Check out their reactions-

The upcoming Pan India film has already grabbed much attention and has created a lot of buzz after its announcement. The film is based on the Indian mythological tale Ramayana, where Prabhas and Kriti will be playing Ram and Sita, Sunny Singh will play Lakshman and Bollywood actor Saif Ali Khan will play the antagonist, Ravana in Adipurush.

On the work front, Prabhas will next be seen along with Deepika Padukone and Amitabh Bachchan in Project K. He also has Salaar in the pipeline. On the other hand, Kriti Sanon will be next seen in films like ‘Ganapath’, ‘Adipurush’, ‘Bhediya’ and ‘Shehzada’. While Saif Ali Khan has recently completed his shoot for the upcoming project ‘Vikram Vedha’.