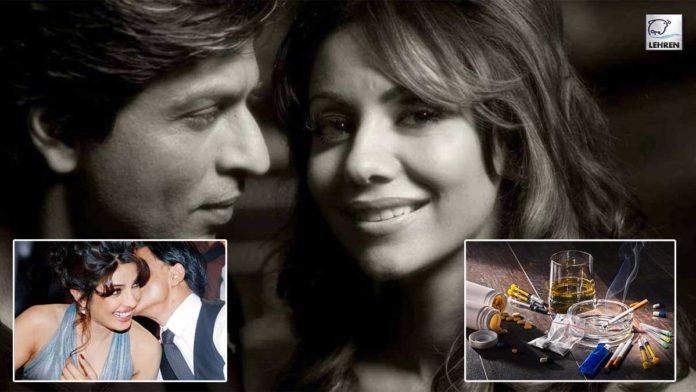 Here are some of the lesser-known dark secrets of the Bollywood celebrity wife and designer Gauri Khan that you never knew, take a look-

So here are some of the lesser-known dark secrets of the Bollywood celebrity wife and designer Gauri Khan that you never knew, take a look-

Shah Rukh Khan’s wife Guri Khan was once caught with drugs at Germany’s Berlin airport. According to a Free Press Journal report, superstar Shah Rukh Khan’s wife, Gauri Khan had once popped up in a Bollywood drugs scandal. As per the report, the designer was stopped at Berlin airport for carrying marijuana. Apparently, this alleged incident took place several years ago meanwhile, regarding this incident no official confirmation ever came out. While Shah Rukh’s wife Gauri Khan had also strongly denied all such reports and rubbish rumors about the incident. She once said in an interview, that she doesn’t get bothered by such rumors.

Don duo Priyanka and Shah Rukh Khan were once rumored about having been in a relationship together. The issue gained a lot of attention from the actors’ fans, however soon after this many reports came out about Shah Rukh Khan’s wife and interior designer Gauri Khan finding out about the alleged affair.

Actress Priyanka Chopra who is now married to the famous Hollywood singer Nick Jonas was once linked with Bollywood superstar Shah Rukh Khan. The rumors gained attention after the two appeared in Don, while when Gauri Khan found out that her husband SRK and Priyanka were entwined in an alleged affair, she decided to give Shah Rukh a divorce in the end. As per grapevine, Gauri Khan later forbade Shah Rukh to work with Priyanka, and ever since then the two never worked together on screen.

Rumors About Aryan And AbRam

Soon after Gauri and Shah Rukh decided to become surrogate parents for their third kid, AbRam, some ridiculous rumors began surrounding the couple stating that AbRam was the love-child of a then 15-year-old Aryan Khan and a Romanian girl. However, during the TED Talk actor Shah Rukh Khan was seen clearing up the rumors and completely shutting them down for once. He said, “Four years ago, my lovely wife Gauri and me decided to have a third child. It was claimed on the net that this child was the love child of our first child, Aryan Khan, who was 15 years old. Apparently, he had sowed his wild oats with a girl while driving his car in Romania. And yeah there was a fake video to go with it. And we were so disturbed as a family. My son is 19 now, even when you say hello to him he says, ‘But bro, I didn’t even have a European driving license.” He added, “Yeah, in this new world, reality slowly became virtual, and virtually became real and I began to realize I cannot say what I thought. And humanity at this time completely identified with me.”