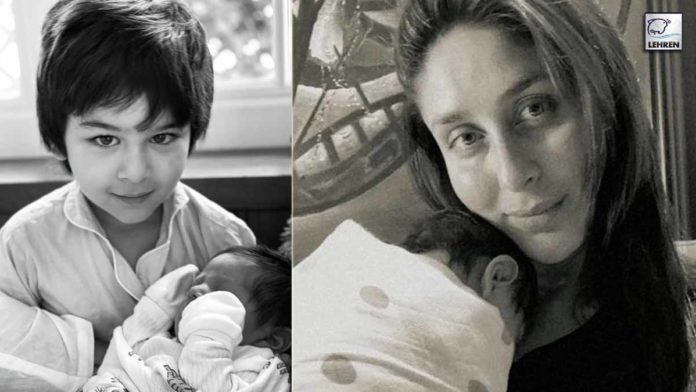 Kareena Kapoor is living the best time of her life right now. She has delivered many hit films in her 20 years of Bollywood career. She is happily married to Saif Ali Khan and has two beautiful sons. Kareena tied to nuptial knot with Saif in 2012 and welcomed their first child Taimur in 2016. In February this year, Saifeena became parents once again as they welcomed their second son.

Kareena and Saif had exposed Taimur to the media when he was an infant. People even made fun of his name. Taimur is constantly under the paparazzi’s lens and often gets trolled on social media. So, this time, Kareena and Saif tried to do things differently. They kept their second son away from media and public glare. After five months, Kareena’s father Randhir told the media that they have named the baby ‘Jeh’.

Also Read: What Is The Meaning Of Jeh? – Name Of Kareena And Saif’s Second Child

Kareena often shares glimpses of her personal life on Instagram. The ‘Jab We Met’ actor is only active on Instagram and has not debuted on any other social media platform. Even though Kareena has kept Jeh away from the media, she sure has shared a few pictures of him on Instagram. Let’s check them out:

1/3 This is the first picture of Jeh that Kareena shared with the world. It was three weeks after she delivered him. Kareena chose International Women’s Day to share Jeh’s first picture. She wrote in the caption, “There’s nothing women can’t do. Happy Women’s Day my loves.”

Kareena held Jeh in her arm while he slept resting on her shoulder. In this monochrome selfie, Kareena made sure not to show the baby’s face.

2/3 The second time she shared a picture of Jeh, it also featured Saif Ali Khan and Taimur Ali Khan. The three important men in her life captured in the same frame on a regular weekend. Kareena wrote in the caption, “This is what my weekend looks like… how about you guys?”

Saif and Taimur were busy adoring the newborn who lay on the floor. Kareena covered Jeh’s face with a baby emoji.

3/3 Kareena shared the third picture on the occasion of Mother’s Day when the second wave of Covid-19 was at its peak in India. The black and white picture featured Jeh along with Taimur. Kareena wrote in the caption, “Aaj umeed pe puri duniya kayam hai, and these two give me hope..for a better tomorrow. Happy Mother’s Day to all you beautiful, strong mothers out there.. Keep the faith.”

Currently, Kareena is busy with the launch of her book titled ‘Kareena Kapoor Khan’s Pregnancy Bible’. Talking about the same, the actress says, “We all have our own unique experiences as expectant mothers, but there are some similarities and with this book, I’m sharing my experiences and learnings, and hope that in some way this will help you on your journey towards motherhood. Carrying both my babies has been the most special time in my life, and I am excited to share the moments and memories with you.”