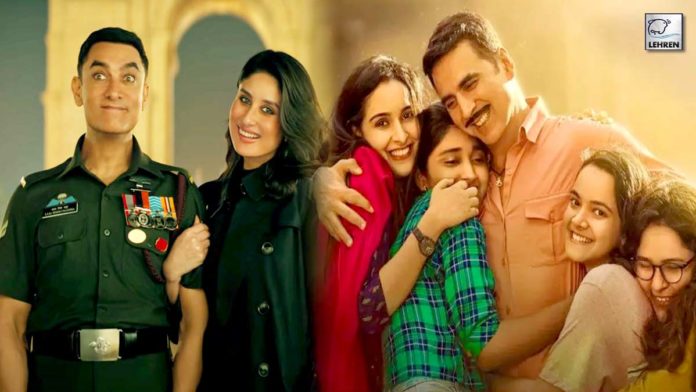 Aamir Khan and Kareena Kapoor Khan starrer Laal Singh Chaddha is currently struggling at the box office. The emotional drama Raksha Bandhan featuring Akshay Kumar and Bhumi Pednekar too is battling hard. Both the movies experienced a low run on their opening day. Despite releasing on the Raksha Bandhan holiday these movies failed to fetch audiences to theaters. The opening day performance has shocked the Hindi Film Industry and now the exhibitors have decided to reduce shows.

The latest news buzzing around is that 1300 shows of Laal Singh Chaddha and 1000 shows of Raksha Bandhan have been reduced across the country on Friday after a low turnout. On the opening day, cinema halls went on to host as low as 10 to 12 people in maximum shows.

According to a source, “Both the films were released with around 10,000 shows across the country and neither of them warranted this sort of showcasing. Even on the opening day, the occupancy was as low as 10 to 12 people in maximum shows. Seeing the no-show, the exhibitors decided to reduce the showcasing of both the films on the second day to save up on the overheads and increase occupancy in the limited shows.”

The source added: “Neither of the films warranted such a wide release. While Laal Singh Chaddha is a wash out in the mass belts, Raksha Bandhan is facing a no-show in some multiplexes. In-fact, despite the voluntary show reduction, many shows of both the films were cancelled on Friday morning due to no audience. It’s a disastrous scenario on the ground.”

Raksha Bandhan was released in theaters on 11th August 2022 which marks the same occasion of the Indian festival. The family entertainer stars Sadia Khateeb, Deepika Khanna, Smrithi Srikanth, Sahejmeen Kaur as the sisters of Akshay Kumar whereas Bhumi Pednekar plays his love interest. It has been directed by Aanand L Rai and produced under the banners of Zee Studios, Colour Yellow Productions and Cape Of Good Films.