’83: Clive Lloyd Refused To Watch THIS Scene While Shooting Of The Ranveer Singh Starrer 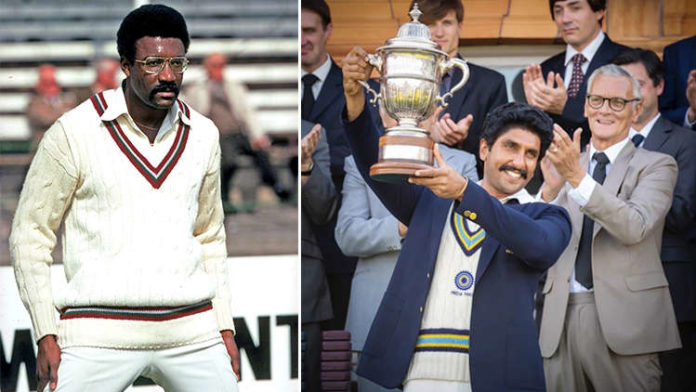 Directed by Kabir Khan, the Ranveer Singh starrer ’83 is amongst the much-awaited films of 2020. The film created a lot of buzz and the first look posters of the film have hyped up everyone’s curiosity. Adding more to the hype, director Kabir Khan who did an Instagram Live with Boman Irani let away some secrets from behind the scenes of the shooting of ’83.

While letting the cat out of the bag, Kabir revealed that former West Indies skipper Clive Lloyd was also present during the shooting of the film and was also present when they were shooting the important scene where Ranveer Singh as Kapil Dev lifts up the maiden World Cup trophy for India. He also confessed that Clive jokingly refused to watch the filming of this iconic scene.

Kabir said that he asked Clive to come closer so that he can witness the scene better, to which Clive humorously replied, “You want me to see that cup going away for the second time and that too from near?”

For the unversed, Clive Lloyd’s son also plays a cricketer in the film. Spilling away more beans, Kabir recalled how Malcolm Marshall’s son Mali who is playing his father’s character in the film ran in to bowl Adityanath Kothare who plays Dilip Vengsarkar and left him hurt. Interestingly, in the real 1983 World Cup tournament, Malcolm’s bowl hit Dilip Vengsarkar and left him injured for real. Post the injury Vengsarkar was away from the rest of the matched.

Speaking of ’83, the film is based on Indian cricket team’s historic win at the 1983 World Cup. The film features Ranveer Singh as Kapil Dev and Deepika Padukone as Romi Dev who is Kapil Dev’s wife.

The film was slated to release on 10th April but the outbreak of the novel coronavirus in India forced the government to impose lockdown. The new release date is yet to be announced but the makers might announce the news post the global pandemic subsides.